By God’s grace, we are believers in Jesus Christ who are led by the Holy Spirit. We aspire to serve as God’s hands in all that we do.

We believe we are all Children of God, and welcome all people into a loving and caring place to worship, give thanks, and grow spiritually with God and each other. We provide opportunities to learn and experience God’s Word through education, music, and ministry.

We are called to go into the world, inspired by Christ’s teachings, to lift up all those in need through prayer, service, and material gifts.  We use our spiritual gifts to work side-by-side to serve our church, our neighbors and the community, renewing our commitment to graciously love one another.

Overland Park Lutheran Church is a welcoming, Christ-centered place for all to worship, learn, and serve.  We connect spiritually with God and each other, using Christ’s message to guide our ministries in our community. 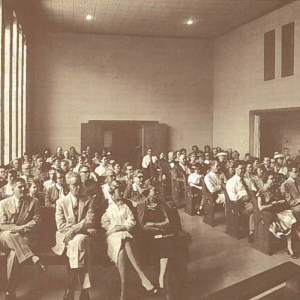 In July of 1950, our first parsonage was purchased on a nearby property and remodeled into a sanctuary by a group of hard working men and women volunteers.  The first service was held there in September with 40 people in attendance.  With the official organizational meeting and constitution signing on January 14, 1951, Overland Park Lutheran Church officially began its ministry in, to, and with God’s people.  Official ground breaking ceremonies were held for the first unit of the church on March 4, 1951 with its official dedication on December 9th, 1951. 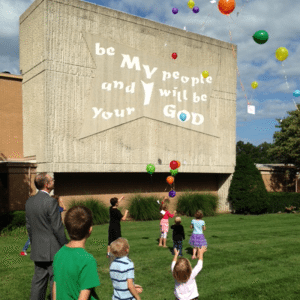 Membership more than doubled within one year and by early 1954 the need for additional Sunday School room was readily apparent.  With pledges more than doubling the estimated need, ground breaking occurred on August 29th, 1954 for the first addition.  This second unit was dedicated on February 6, 1955, creating additional Sunday School facilities and a large social hall.  Later that same year, in less than five years’ time, membership had reached over 500.

With membership continuing to grow, plans for the next phase were already underway less than five years later and the third unit was dedicated on October 1, 1961, with a  new worship space, Sunday School room and other facilities.  An annex was then purchased in 1964 for yet additional Sunday School space.   Finally, on January 18, 1970, ground was broken with an underground blast of dynamite for the fourth unit.  This was the final unit of a long range master plan envisioned nearly twenty years earlier.  This unit was dedicated on March 21, 1971, and included the long awaited and present day sanctuary, as well as the narthex and library.  On the exterior, this final phase also included our two most recognizable features to this day, the bell tower on the South side and ribbed wall featuring the words “Be My People and I will be Your God” on the East side.

Sadly, later that same year, one of the original visionaries and architect, Don Hollis along with his wife Leah, both part of the original Sunday school class and charter members, were tragically killed in a plane crash.  The original worship space was renamed and dedicated as the Hollis Memorial Chapel in their memory in November of 1971.  The original overflow room for the area now serves as our nursery and sits directly across from the sanctuary.

The Evangelical Lutheran Church in America (ELCA) is one of the largest Christian denominations in the United States, with about 4 million members in nearly 10,000 congregations across the United States, Puerto Rico and the U.S. Virgin Islands.

The ELCA is the church that shares a living, daring confidence in God’s grace.  We believe that faith comes through the good news of Jesus Christ, giving us the freedom and the courage to wonder, discover and boldly participate in what God is up to in the world.

We welcome you to join this community of faith, which may be experienced as a member of OP Lutheran Church, an ELCA congregation.

Come! Worship With Us!

I stand at the door and knock. If anyone hears my voice and opens the door, I will come in to him and eat with him, and he with me